TEHRAN, July 8 (Xinhua) -- The international community called for a peaceful solution after Iran announced Sunday that it is raising the uranium enrichment level beyond the limit set in the landmark 2015 international nuclear deal.

"Today, we will start enriching uranium beyond 3.67 percent, and its level of purity depends on our needs. This will happen officially," said Ali Rabiee, spokesman for the Iranian government, on Sunday.

Global leaders expressed their worries about Iran's new move, which further violated the Joint Comprehensive Plan of Action (JCPOA) curbing its nuclear program with sanctions relief in return, and urged a peaceful settlement. 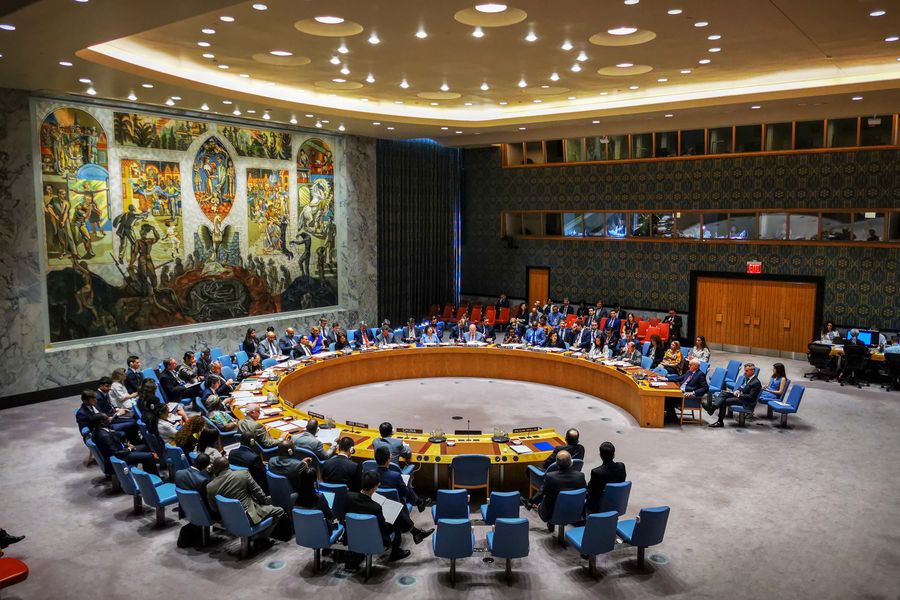 The United Nations Security Council's semi-annual briefing on the implementation of Resolution 2231, which endorsed the Joint Comprehensive Plan of Action (JCPOA) on Iran's nuclear program, was held at the UN headquarters in New York on June 26, 2019. (Xinhua/Li Muzi)

"Iran's latest expansion of its nuclear program will lead to further isolation and sanctions," tweeted U.S. Secretary of State Mike Pompeo, calling on other nations to restore the standard of no enrichment for Tehran's nuclear program.

The British Foreign Office also issued a warning Sunday, saying "while the UK remains fully committed to the deal, Iran must immediately stop and reverse all activities inconsistent with its obligations."

Britian is coordinating with other countries of the de-nuclear pact "regarding the next steps under the terms of the deal, including a joint commission," an office spokesperson said.

"We strongly urge Iran to stop all activities that are not consistent with its JCPOA commitments," said French Foreign Ministry spokesperson Agnes von der Muhll. "France is in close contact with the concerned partners to initiate the necessary de-escalation of tensions ...," she added in a press release.

As Germany got "extremely worried about Iran's announcement," the country urged "Iran to discontinue and reverse any steps that are inconsistent with Iran's commitments under the JCPOA," said a spokesperson of the German Foreign Ministry.

The European Union (EU) remains "extremely concerned" about Iran's decision to step up enrichment and is in contact with other parties to the accord to discuss next steps, "including a joint commission," EU Spokesperson Maja Kocijancic said Sunday.

While European leaders were still mulling next plans, Israeli Prime Minister Benjamin Netanyahu, a vocal opponent of the 2015 nuclear deal, urged them to reimpose sanctions on Iran, accusing the Islamic republic of enriching uranium to "build nuclear weapons."

In May last year, Washington unilaterally abandoned the 2015 nuclear deal and restarted to sanction Iran.

On May 8, a year after the U.S. unilateral exit, Iran stopped implementing some of its commitments under the deal and set a 60-day deadline for the Europeans to help the Islamic republic reap the economic benefits of the deal.

On Sunday, Iran's Deputy Foreign Minister Abbas Araqchi blamed European countries for failing to live up to what he called "their own commitments." But meanwhile, he stressed that Iran will spare opportunities for diplomacy as a means to salvage the deal.